Samantha Ottley made the most of a catch drive behind an All Stars runner to the land the richest win of her career in the $161,000 PGG Wrightson NZ Yearling Sales 2YO Pace at Addington on Friday, May 3.

The Overport Lodge reinswoman, and a determined One Change (Bettor’s Delight-Changedown, by Falcon Seelster-Chaangerr), charged home to snatch a nose win over the favourite and All Stars stablemate, Smooth Deal (Tim Williams). 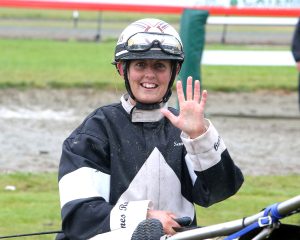 Samantha Ottley, after a five-win haul at Timaru in January last year.

It was another win for Sam in the Lone Star colours of co-owner Trevor Casey, and one of three wins on the night for the top reinswoman.

Sam’s previous richest win was in the 2016 $150,000 Harness Jewels 4YO Diamond at Cambridge with Overport Lodge mare, Rocker Band.

The half-brother to former useful filly Renske B adds to the family of NZ Cup winners Chokin and Changeover.

Sam’s Addington treble elevated her to 45 wins for the season, taking her career tally to 373 wins.

She was also successful with capable intermediate-grade trot mare Ruthless Kayla, for the Kevin Fairbairn stable, and with Bettathanfast, for the Cran Dalgety stable.

Meanwhile, fellow Overport Lodge reinswoman, Sheree Tomlinson added to her top junior season with a winning double at Invercargill on Saturday, to advance to 42 wins for the term.