Regan Todd, right-hand man of the Woodend Beach arm of the Mark Jones Racing Stables, nowadays in a lesser capacity.

Regan is now a fully-fledged trainer on his own account and doing a fine job.

He has made a valuable contribution with the maintenance of top trotter Master Lavros, and pacer Saveapatrol, along with other Overport Lodge horses requiring beach training.

Regan had success as a driver before moving his attentions to the training field.

He reined his first winner _ Die Another Day _ at Addington on Friday, June 30, 2006, when on loan to Woodend Beach trainers David and Catherine Butt.

Regan, who began working for Wyndham trainer Brendon McLellan, spent 3 months during the winter with the Butts’ in 2006, and the following year made a permanent move to Canterbury.

After further experience with David and Catherine Butt, Regan was firmly established as a successful junior driver when he teamed up with Mark Jones.

Regan, sponsored by the Yaldhurst Hotel, is the latest generation from a heritage of successful horsemen.

His father Barry co-raced former smart pacer Happy Patron, trained by Brendon McLellan and driven by Ricky May, for an upset win in the 1986 Flying Stakes (Group Two) for 3YOs at the Addington easter meeting. Barry  also co-raced good Southland pacer Rathbone (9 wins) before his sale overseas two years ago.

Regan’s late great grand-father “Doody” Todd, previously trained Blue Mist, who gained fame by setting a world mares’ mark for a mile and a half in West Australia in 1953.

Regan gained his first win in the training role with Del Sur at Gore on September 7, 2010, sporting the former colours of Regan’s late grand-father, Ray Todd.

Del Sur was driven in the Gore victory by Brendon McLellan. 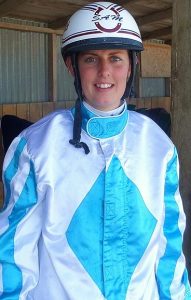 Overport Lodge Burnham foreperson and successful reinswoman Samantha Ottley joined the team in October, 2015 and is back at the Burnham base with Mark after a successful stint with Regan Todd at Woodend Beach.

“She is a big asset to the stable with her experience and driving ability,” says Mark.

Sam has been the regular driver of smart stable mare Rocker Band during her 4YO season, combining first-up with her for a career best 1:53.3 mile at Winton.

She won her first three drives behind the daughter of Rocknroll Hanover and 2005 NZ Cup-winning mare, Mainland Banner, and ran third in the $40,000 Premier Mares Championship.

The wins have come regularly again for Sam since returning from an injury layoff in December.

She racked up 122 wins during her junior career.

Sam won her first raceday drive on her 18th birthday behind Nigel Paul, a horse trained at Orari by her mother Denise, in a one-win race at the Kurow meeting at Oamaru on August 3, 2008.

Her junior career blossomed under the guidance of trainers Colin and Julie De Filippi.

She also scored an upset win in the 2012 Geraldine Cup behind the Colin and Julie De Filippi-trained mare Just Rose, and partnered that stable’s top trotter Stent, for a race win, and also a second in the Group One 2013 NZ Trotting Championship.

Sam also racked up 41 wins in her first season as a support open driver in 2014-15 when attached to the Robert Dunn stable. 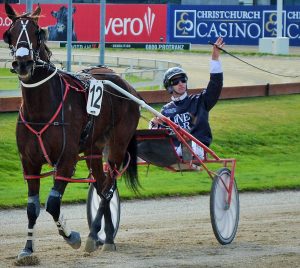 The Mark Jones stable has no shortage of driving talent with 2015 champion junior Robbie Close available to the Overport Lodge stable through his association with Regan Todd at Woodend Beach.

He tied with a former Overport Lodge employee Stevie Golding on 42 wins apiece for the Junior Drivers Championship title in 2014-15.

Robbie made the most of his final term as a junior, winning both the McMillians New Zealand Junior Driver Championship and the Australasian Young Drivers Championship within the final three months of the season.

He also racked up his 100th driving win during the NZ Drivers Championship in July.

Robbie was appreciative of the positive advice given to him by Mark, a former world drivers champion, and Regan Todd, after joining the stable.

Despite restricted opportunities in his first term as an open driver, he’d still brought up 19 wins by mid-February.

Robbie,  a former South Aucklander, had stints with Michelle Wallis and Bernie Hackett, and Barry Purdon, before moving to Canterbury in search of opporunities in  2010.