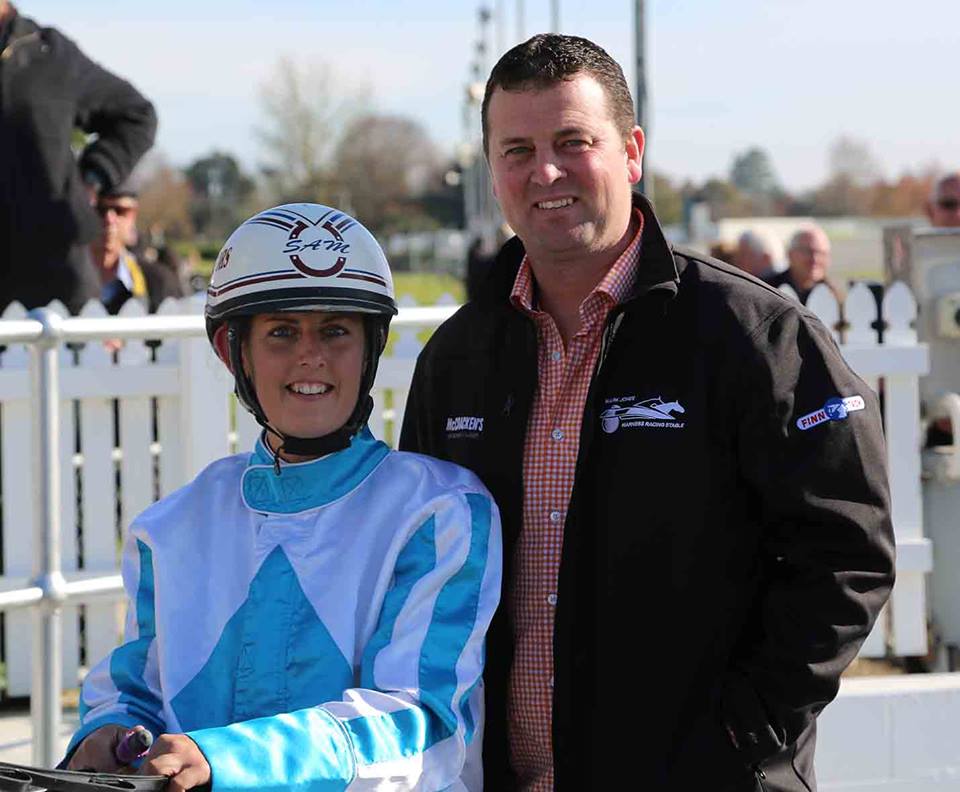 After conquering the world stage as a driver in 2003, Mark Jones is now applying the same determination and skills to reach the top as a trainer.

Mark, hugely successful as a junior and open driver, is now taking on the challenge of becoming one of NZ’s leading trainers. Now in his 5th season as a public trainer, he has been quick to find top results in his training role.

He trained five winners on a single night at Addington on May 1, 2009 _ Unqiue Star, Best Chance, OK Courage, Crystal Star and Alexis. This year has seen him train and drive a Group One winner _ the NZ Trotting Derby with top filly _ Shezoneoftheboyz _ and also rein the NZ Derby (pacing) winner Captain Peacock.

The Mark Jones Racing Stables was on a roll in 2009-10, preparing 52 wins. He has also had Group Three training-driving successes with Shezoneoftheboyz (Hambletonian Classic) and Crystal Star (Forbury 4YO Championship 2700m, and won mutlple provincial cups with promising stayer My Man Dan (Hororata, Waikouaiti & Marlborough Cups).

Mark’s strong work ethic and natural ability has seen him get to the top as a driver, and now trainer. Mark notched his first career driving win at his 3rd racedrive attempt at Waterlea, Blenheim, scoring by 2 lengths in November 1996 with Lord Phantom, trained by father Peter.

In 1999 he won the Australasian Young Drivers Championship, then a years later, in his last as a junior before Harness Racing NZ decreed he should lose his junior status for being too successful, he reined 100 winners in a season for the first time. Twelve months later, in his first term as an open driver, Mark won the NZ Drivers Premiership with 116 wins _ at the time a record for a South Island-based driver.

At 22, he also became the youngest driver by a few months to win a NZ Drivers Premiership, eclipsing Maurice Holmes, who won his first premiership at the same age in 1931. At the end of that memorable 2000-2001 season, Mark enjoyed a memorable night at Moonee valley, Melbourne, winning both the Australasian Breeders Crown 3YO Fillies Final with Sparks A Flyin, and 3YO Trotters Final behind Locofoco.

“The media were bagging me in Aussie so to do that was best way to shut them up,” he laughed.

Mark, who was driving horses solo from the age of eight, coudn’t help being successful.He is the fresh face among a long-running successful harness racing legacy of his late grand-fathers Derek Jones and Reg Stockdale, father Peter Jones, and cousins Anthony and Tim Butt. Outside his own family involvment, Mark has also gained experience working for Bob Negus, Brian O’Meara, Cran Dalgety and Bruce Negus.

ANYTHING YOU WOULD LIKE TO CHANGE IN HARNESS RACING: “Smaller intervals at meetings, more chances for poorer horses and stakes to increase.”