Mark Jones claimed the biggest title of his driving career when he was crowned World Driving Champion in Canada in 2003.His late grand-father Derek Jones acknowledged the feat as one of his best moments in harness racing as he cheered Mark home to win the title.A throng of well-wishers turned out at Christchurch airport to welcome the world champion home after conquering the world. “It was a great trip where I met so many wonderful people, have made many friends, and winning the series was great,” he said. Mark produced the goods in the final round of the five-round series, …

END_OF_DOCUMENT_TOKEN_TO_BE_REPLACED

Welcome to the Mark Jones Racing Stables website. Mark, now in his third season as a professional trainer, has quickly risen to being among the leading trainers in NZ. A champion driver, Mark has all the attributes to also become a champion trainer. This website is here for you to learn more about Mark, his horses, and his staff. Please come back often for regular updates, including comments about his upcoming drives.

Mark racked up his 13th win for the season, with Cran Dalgety going winless on the night, remaining on 14 wins. 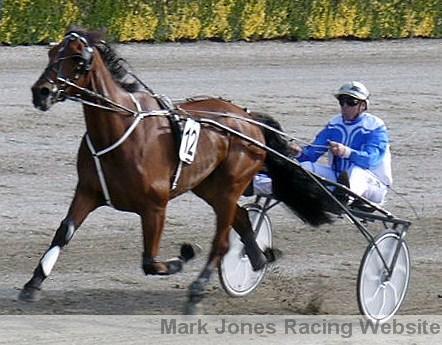 He had pleased Mark with winning both a Rangiora trial and a Methven workout
in this preparation.

The big Sundon gelding stepped straight to the front and was always in control for Mark, coming clear by 2 1/2 lengths to beat trailer Live The Dream and later closer Escapee.

Master Lavros, now five, took his career record to nine wins and three placings from only 17 starts, for $82,859 in stakes.

Turning for home, Bay Emerald was off and gone with Ultimate CC, locked up three back on the markers from an inside second row draw, doing well to get within a head of the winner.

To be a successful harness driver, you need to be able to sum up a race and make things happen.

Kimberly Butt did just that at her sixth racedrive at Forbury Park on Thursday, October 3, 2013.

Courtesy of a plum drive behind Saveapatrol, a rising star for employer Mark Jones, in the Dunedin City Ford Junior Drivers Mobile Pace, Kimberly didn’t panic when beaten out of the gate on the raging $1.20 favourite.

She had to be confident the Grant Hatton-owned Christian Cullen gelding would have a class edge on her rivals and the promising 4YO was up to the task.

After taking control with 1100m remaining, it was a case of being too big, too strong. She celebrated the occasion with a victory salute on the line.

Saveapatrol was inclined to knock off a touch near the finish but the winning result was a comfortable 2 1/4 lengths margin over Rock Of Tara.

Kimberly, 19, daughter of leading Group One reinsman Anthony, and Karen Butt (daughter of former Chertsey/Ashburton trainer Dick Prendergast), has the pedigree of a winner.

Her brother Chris has been successful as both a driver and now a trainer in West Australia, while her uncle Tim has trained the winners of most of the elite races in Australasia.