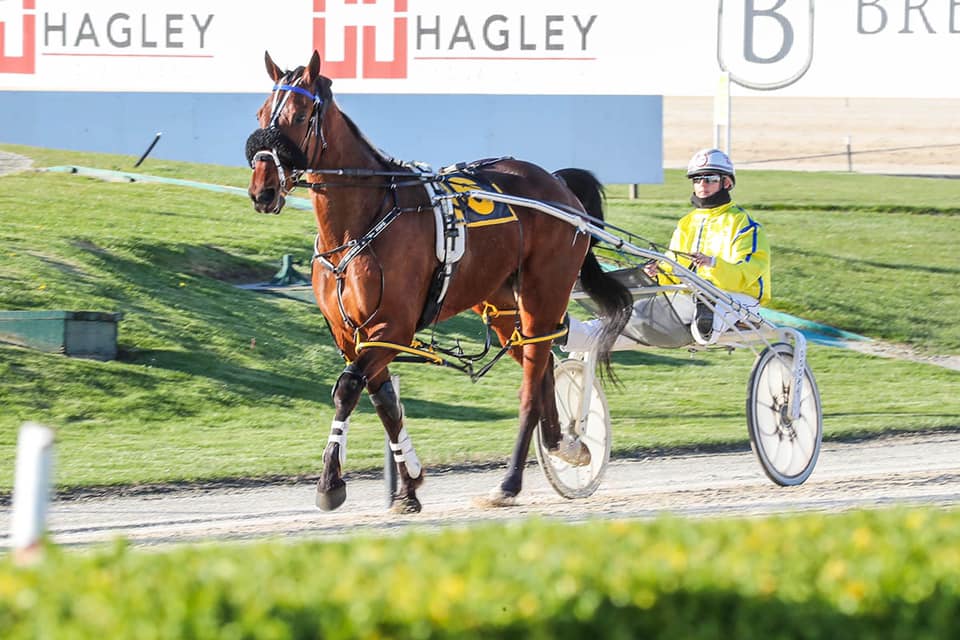 There was a time when it was wondered if Deny Everything would ever make it back to the races.

A winner of one of his four career starts back in 2019, the ability was there but the body wasn’t.

An injury, of which was never fully identified, and a wind operation took the big son of A Rocknroll Dance off the track.

“He was sore, but we never found what it was, so we just gave him time,” Mark Jones said.

That was almost two years ago, but if the two starts since he returned from that spell are anything to go by, it’s been time well spent.

A fresh up win at Ashburton in a junior drivers’ event earlier in September turned a few heads, but last week at Addington Deny Everything stamped himself as horse of high order with a breath-taking win.

After working hard to find the front, the five-year-old ran his rivals off their feet in a 1:56.6 mile rate to win by four and half lengths in the hands of Sam Ottley.

“He’s got a great attitude and ability to win a fair few more races,” Jones added.

This week it’s out of the frying pan and into the fire with a return to Harness HQ on a Premier night of harness racing.

He jumps from a Rating 45-55 event into a Rating 59-70 but gets a boost with the inside of the front draw from which to work from.

And while Jones knows he’ll be competitive, there are some concerns.

“He’s really only won the two races considering he picked up a penalty free win and he’s taking on some horses who have won five or more races, so it’s a big step up.

“I know he’ll be competitive though; we’ve got a good draw to work with so hopefully he’ll put in another good performance.”

Deny Everything opened a $4.50 second favourite for this week’s assignment behind Darling Me.

Meanwhile, a slight hiccup has kept Stylish Memphis away from the track this week.

The talented mare was accepted for the Canterbury Classic following her good run for second behind Darling Me last week, but it’s a steady diet of the water walker for the next few days after a foot abscess was discovered during the week.

Little brother, Memphis Major will hop on the float and head to the meeting though.

The promising two-year-old kicks off his campaign in the last race of the night but has copped the worst possible draw from the outside of the front row.

That being said, Jones isn’t expecting too much from the son of Art Major first up with plenty in store.

“He’s still very much on the way up and has a lot to learn, he’s pretty green.

“But he’ll take big improvement from this run as he’s not screwed down with just yet.

“We’re taking our time with him as he will develop into a nice horse, so he’s just a watch job this week probably.”

The stable is also represented at the Premier meeting by both Plutonium Lady and Sioux Princess with both dropping back in grade from some of their recent assignments giving them some chance in their respective races.